Foraging for food in our shared environment has been part of our culture and history until relatively recently as public space has become more sterile with the use of non-native and non food plants. Recently there has been a resurgence of interest in growing food within our shared landscape with projects like Incredible Edibles Tormorden and EATS fife leading the way. These projects have been shown to not only provide no-cost and healthy food for the foragers but also stimulate wider health benefits, landscape enhancement and reduce maintenance cost.
The Anstruther and District Allotments Association began the Edible Routway project in 2015 following discussion with Fife Council as the landowner, Waid Academy and the Anstruther Improvements Association. Initially the project sought to replace the loss of trees within our open spaces following substantial losses in 2013 from storm damage and disease (8 trees lost on Dreelside in 2013). Historically Fife has very low tree cover and Anstruther has very little tree cover and no woodland (defined as).

The aim of the scheme was to plant fruit trees and edible plants within the landscape in order to provide a regular, seasonal food source that was easy to maintain whilst adding visual and wildlife value. There are similar community orchard projects in Fife including Buckhaven CLEAR, Newburgh Orchard town and nationally the Commonwealth Orchard Project that are using public orchards to reinvigorate interest in local food and biodiversity.

The 2009 Greenspace audit of the area shows a wide tract of public greenspace running along the northern spine of Anstruther that could be used for planting edible plants and there is opportunity to re-plant now with orchard trees.

Initial partnerships will now be sought from community representative structures and groups interested in our greenspace development including:

Phase 1  -Dreelside, 2014
Saturday 18th April
far 15 fruit trees have been planted by the community - 12 apples and 3 plums – plus a variety of berry fruits set within the hedges and un-mowed borders To establish the project and link to the existing food growing space at the Dreelside allotments a first phase of planting is proposed along the linear park that runs from the Allotments to the old train bridge on the Dreel Burn 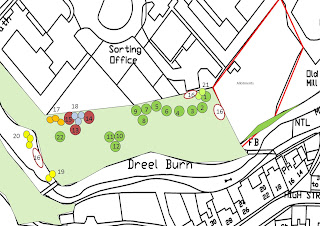 Planting List
Dreelside offers a good south facing aspect and shelter from most sides except strong westerly winds. A variety of fruit trees and bushes were planted by local residents on the 18th April 2014. The orchard was funded by the Anstruther Community Kist and Metaflake.

Current status
All trees are now well established and thriving. Fruit harvest has been gradually increased over the past 3 harvests in order to aid establishment. This year we expect to leave the trees to crop fully.
The berry bushes within the borders struggled and failed due to competition from vigourous plants around them after a couple of years but the ones within the mowed are continue to thrive.

12 Apple trees planted in Bankie Park on 1st December 2014 by Anstruther Primary, Waid Academy and members of the community
Replanting of 5 lost trees in March 2016

This orchard was made up of just apple trees on vigorous or semi-vigorous root stock. There is a nice mix of old heritage varieties and newer varieties for the more modern sweet tooth! The initial planting took place in early winter which is considered best practice to aid tree establishment. However, this made the trees very vulnerable to vandalism over the winter as they were small and lifeless without leaves on leading to 6 trees being lost.
The replanting in March 2015 took into account the high loss of trees in certain areas and the concerns of a neighbour overlooking the park so that more plating was along the southern edge.

Current Status
Most of the larger trees are now well established especially along the southern edge with the smaller trees towards the centre of the park still suffering from breakages. Fruit harvest has been managed each year to aid establishment and this will continue for 2 more harvests.
Figure 1 Community members replanting Apple trees in Bankie park March 2015

Phase 3 –Queens Gardens 2014
December 2014 - 5 Pear Trees
Queens gardens park has lost a number of trees over the past 5 years through storm damage and management. These young pear trees were planted along the border of the footpath heading towards Pittenweem but are struggling due to the exposed nature of the site and dear stripping the bark. Two trees have replanted since 2014 due to deer damage but the rest struggle on. In retrospect its probably not the best site for pear trees who don’t like windy sites. We will try to plant an 50m edible hedge along the Southern edge of the footpath in the future.
Tree List

“The Tree”, as most children and parents refered to it, was a 40 year old sweet chestnut at the centre of a network of dens and natural play features neighbouring Anstruther Primary School. It was very popular with families and childminders as it provided a sheltered site where childminders could monitor their children undertaking games and adventurous natural play after school as well being a popular place for independent play. It was best of relatively few spaces in the area where children could indulge in creative play around trees.
In March 2016 fourteen trees including “The Tree” were chopped down without consultation or warning. Children and parents reacted angrily to the loss of this space. The site was managed by the Anstruther Primary PPP and they appear to have removed the trees due to fear of damage to neighbouring properties even though these were relatively young trees with no indication of movement. 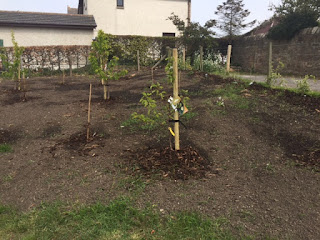 In April 2017 a mini Orchard was planted in the same space by a contractor. This is mixed orchard of cherry, pear and Apple on semi-dwarfing rootstock. TBC

With 40 fruit trees now having being planted within the greenspaces of Anstruther there is a need to publicise the opportunities for local people to harvest fruit and take part in fruit tree care. This will be done by setting up a Facebook site and running community harvesting events along with training around pruning and tree care over the next year.
New sites
Potential sites for further work from 2017 have been identified through the creation of a multi-use path. A number of sites along the path are suitable for small edible routes plantings that could incorporate wildflowers as well as low maintenance shrub areas.
·       Edible Hedge Planting in Queens Park – late 2017
·       Edible hedge planting in Dreelside meadows – late 2017
Further sites to be investigated in consultation with public include